How a Detour Led to a Breakthrough Success 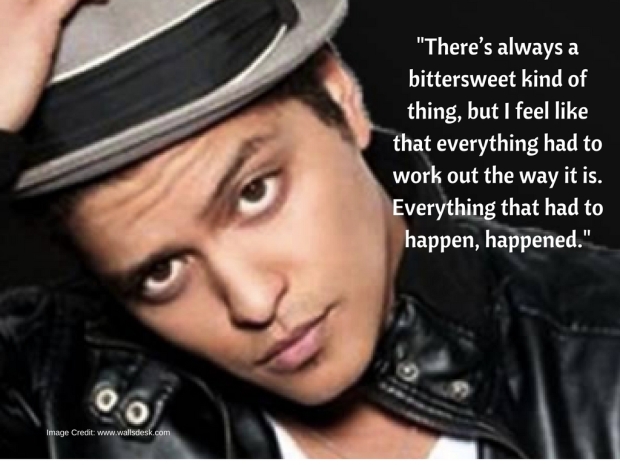 Success is not always a straight path. If you want something, just do it!  At the age of 19, Bruno Mars almost gave up his dream of becoming famous. After graduating he left Hawaii and went to Los Angeles where he was rejected by Motown Records, unemployed and frustrated.

Born October 8th in 1985 in Honolulu, Hawaii to Bernadette and Peter Hernandez. At the age of 2 his father nicknamed him Bruno (real name Peter Gene Hernandez) due to his resemblance to a wrestler named Bruno Sammartino.  Bruno was musically inclined from a young age having grown up in a showbiz family. His father was a Latin percussionist and his mother a singer and the family entertained on a nightly basis to excited audiences. The family performed a range of musical styles including hits from Motown and doo wop melodies. Surrounded by entertainers and with no formal instruction Bruno quickly learned how to play the drum, guitar and piano. He then joined the family entourage and encouraged by an uncle started doing Elvis impersonations at the age of 4, which proved to be hugely successful, this was soon followed by Michael Jackson imitations.

After graduating in Hawaii, Bruno decided to move to Los Angeles where he believed he could fulfil his career as a successful solo artist. After moving, reality soon hit home as he quickly realised that he was unable to pay his rent and bills. He sought employment as a DJ, however, having fibbed about his capabilities as a DJ, he lost the job.

“There’s always a bittersweet kind of thing, but I feel like that everything had to work out the way it is. Everything that had to happen, happened.”

Bruno became disgruntled that he was unable to propel his music career forward and decided to dabble in song writing. It became apparent that he had to do everything himself and nothing was going to be handed down or provided to him. Bruno’s career breakthrough came when he was introduced to songwriter Phillip Lawrence. Together they wrote a song which they presented to a record label, the downside however, was that the company insisted on having their own artist perform the song. Bruno was unwilling but when they offered $20,000 USD, he relented. That was a defining moment as Bruno recognised the opportunity that he could write songs for other artists.

“Writing for other artists, helped me figure out that magic you have to capture to make everyone connect with a song.”

After a string of hits for other artists, Bruno’s solo career breakthrough came when he sang the chorus in rapper B.o.B’s hit song ‘Nothing on You’. His hopes of being on center stage was launched as he now stepped out from behind the scenes to the main stage. His success rocketed as he continued to release hit songs one after another and in 2014 he won a Grammy for Best Pop Vocal Album as well as other numerous musical accolades.

Admittedly Bruno’s path to success was not a straight road and certainly not without struggle. Opportunities presented themselves such as the song writing and Bruno could have rejected it, had he done so, who knows where he would be today. Instead, he seized the possibility of helping others succeed and in doing so learned the art of writing amazing songs. This decision would eventually lead him back on track and catapult him to international stardom.

“You can’t knock on opportunity’s door and not be ready.”

Often the decisions we take may not necessarily be our ideal choice but become apparent to serve a purpose. We can choose to ignore them and then miss out on the potential opportunities that come with it. So enjoy your journey, learn the lessons and eventually you will come full circle to be where you were always destined to be.

This site uses Akismet to reduce spam. Learn how your comment data is processed.